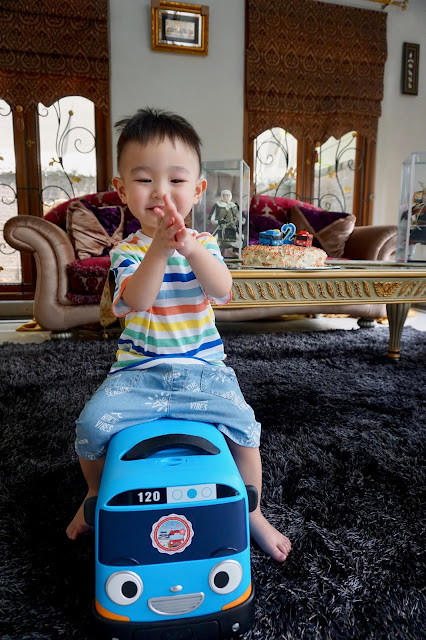 "A mother's love knows no limit. She'll try everything that is best for her children, even it's beyond her ability." ~ Stella Angelita ~
It sounds right for me, and also every mothers in the world. When we talk about our children, it's like nothing impossible. Even when it's really hard, we'll try to learn and do our best to help them. I've been a mother for more than 8 years. During that time, I had learned many new things. All the things I've learned are not for my own sake, but for my children. Without realizing it, I'm not just a housewife. Even though I just stayed at home, I've played many important roles for my family :

Medicine Experts
When in high school, I wasn't a student from science class who learned about physics, science or biology. I was in the social class and just learned about business, history, etc. So I knew nothing about people's sickness, medication, and anything about that. When I got sick, I just took Paracetamol, that's all. And if I didn't get any better, I went to the doctor, asking for prescription medicine. But I didn't know what's inside it, and I didn't care about that, as long as I could get better.

However, since I have kids, I started to learn about the ingredients from the prescription medicine. I need to know what the doctor gave to my children, starts from the uses and the side effects. I also learned little bit about the dosages based on the age and body weight, just in case if there's a mistake on the prescription.

Personal Teacher
As a mom, I have a very important role in my family, especially for my children. For them, I'm a role model. I'm the first person they see, and listen every day. They will follow all the things I do, and do everything I tell. Indirectly, I'm a teacher for them. Even when they started to go to preschool and learn new things like reading, counting, and writing, they still need me as their personal teacher. Well, it's not a big deal for me. I could learned about phonics (though I didn't get it when I was a kid coz I just studied at National School) just in a short time. But, as they growing up, the lessons that they learned at school also get harder. There are some lessons which are new for me because Aurelia goes to school with International Curriculum, and I wasn't. In this case, I need to learn about these new lessons 1 step forward before she gets it from school, and teach her about it. 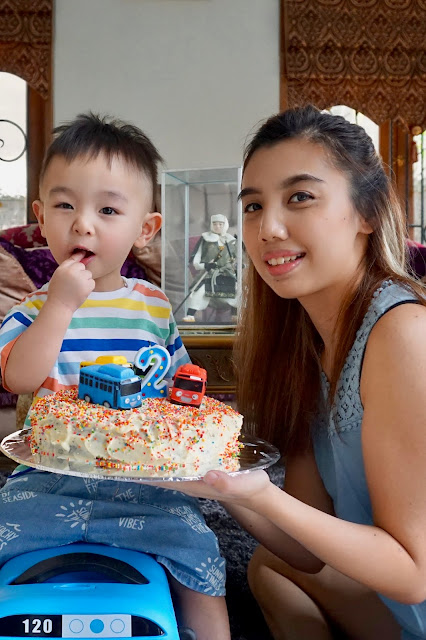 A cook
It might sounds simple for every woman. Cooking is something that every woman can do, even from young ages. But it's not for me. I never been to the kitchen and cooked (even a simple food - unless it's an instant noodle) until I graduated from High School, and married. I started to learn how to cook by read recipe books, watch TV shows, and try to do it with simple dishes. However, as the children growing up, they asked for other "complicated" delicious dishes. Well, it's my job as a mom to cook it for them, and to be honest, it's kinda hard for me because I'm not really good at cooking. But as people say, nothing that you can't do as a mom, especially if it's for children. Like other problem that I got lately, when Winston became a fussy eater, I need to be creative and learn about what foods toddler like. 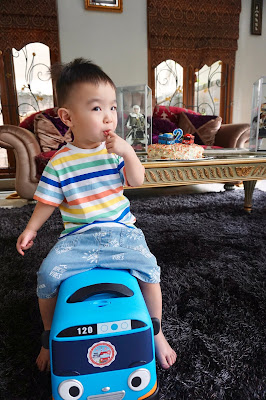 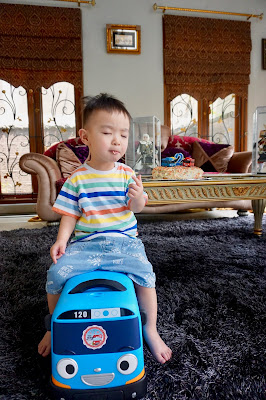 Those 3 things are only some of the new things that I learned for the benefit of my child. Nowadays, I started to learn a new things, baking. Actually, Aurelia has been asking for me to bake some cakes / cookies since a long time ago. But baking is one thing that I never "touched" in my whole life. So I just ignored it, until last month. Well, last month was September, and Aurelia knew it was Winston's birthday. She was insisting me to bake a birthday cake for Winston. She got that inspiration from a video, about a sister made a birthday surprise for her little brother, starts from bake a birthday cake, and do some decoration. Watching that video, made Aurelia want to do it for Winston because he also likes to watch that video. He likes when people sing "Happy Birthday song" and give a tasty looking birthday cake. This time I couldn't ignore them so I decided to learn about baking. 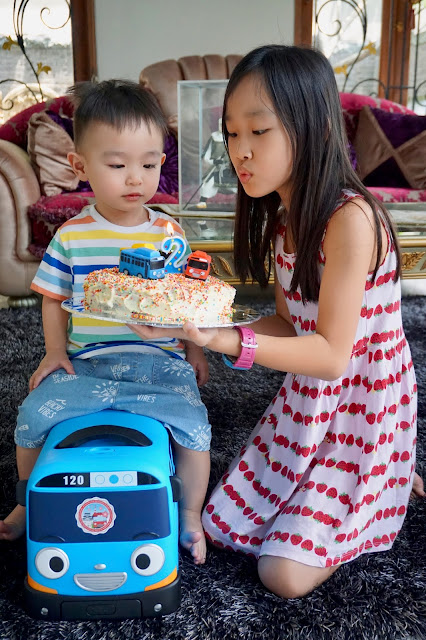 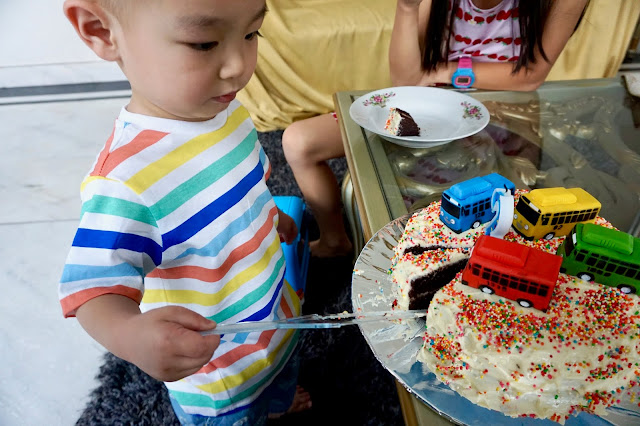 I started by looking for a birthday cake recipes, and honestly, they all looks very hard for a beginner like me. Many ingredients needed and step by step to do. I was afraid if it's gonna be failed, so I tried to find the easiest cake recipes, and mixed it with the easiest buttercream frosting recipes. Since Winston loves choclate cake, I decided to make it and mixed it with cream cheese buttercream frosting. Hmmmm. It sounds great and I believed it's gonna be a great combination for a birthday cake. You can see the chocolate cake's recipe here and for the cream cheese buttercream frosting here. They have a lot of good reviews and many people have made it successfully. With those reviews, I was believing that I could make it too. 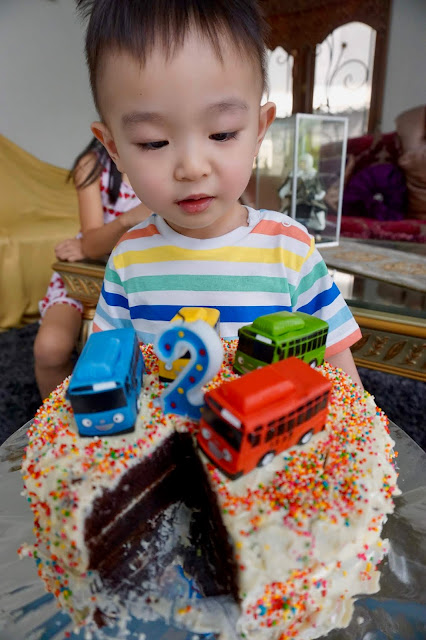 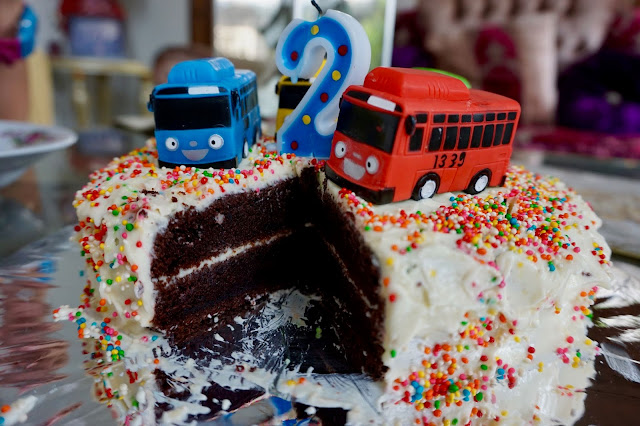 Aurelia and I learned to make a cake together, and voilaaa.... It's successful! We really made it and the cake taste so good. It was really moist and has a perfect sweetness level. For decorate the cake, I just used some special toys from "Tayo the Little Bus" characters (it's Winston's favorite). And I also put some sprinkles on top to make it colorful. Well, for the first time baking it's not so bad. But I'll try to make it better another time. 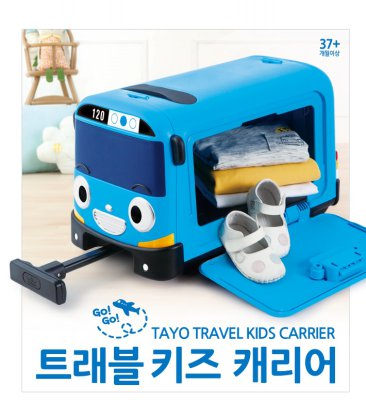 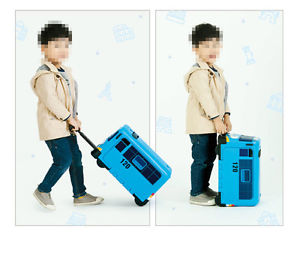 Anyway, if you're wondering about that huge "Tayo", actually it's not just a toys. It's a travel kids carrier, which has little wheels so your kids can ride it on. It was Winston's birthday from Ivan, and he loves it. He likes to ride it and that's why I put this little bus on his photos. Once again, "Happy Birthday Winston". I wish you can grow up happily, and always stay healthy.
Love, Mom~~ 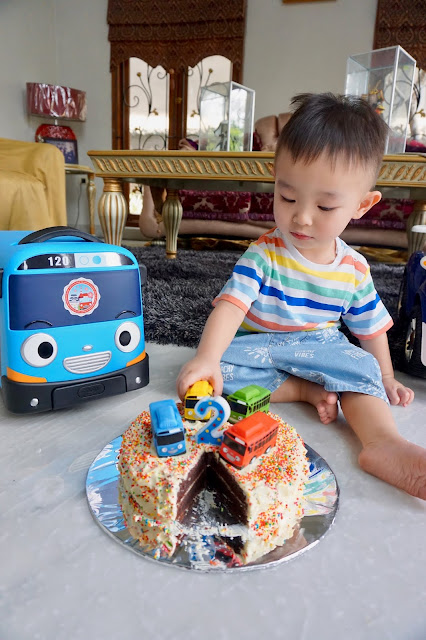